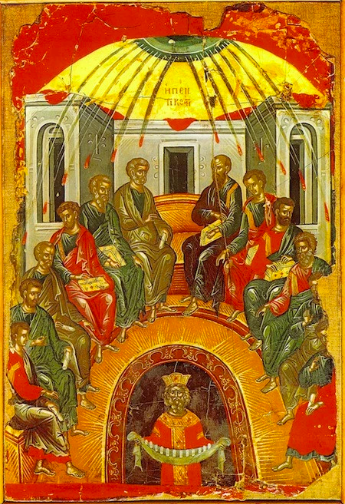 PENTECOST- THE COMING OF THE ONE WHO ENABLES US

What is the significance of the number 50? In biblical literature, 7 is a perfect number. 7 x 7 = 49 which would be perfection times perfection. 50 is 49 + 1, ultimate perfection. For the Jewish people the giving of the Law is the ultimate and perfect act of God because it is the guide and foundation of spiritual life. For Christians, the giving of the Holy Spirit on Pentecost is God’s ultimate act in human history. It is seen as the completion of God’s giving of Himself to save the world.

The human race and the entire cosmos were thrown off track when humanity turned away from the source of its being, God, in the event known as the ‘fall’. The world became lost and confused because it had determined to pursue its path in life without reference to God or His will. The Tower of Babel represents the height of this rebellion where humans became totally wrapped up in their own hubris and pride with the consequent result of even greater confusion and chaos. The Tower of Babel represents the fruit of the ‘fall’: the human race becomes unable to communicate coherently as expressed in the confusion of tongues. This becomes both a self-earned punishment but also a check on the ability of the human race to inflict even more damage on itself. The confusion of tongues is a limitation on the ill effects of human ambition apart from God.

The Christian feast of Pentecost celebrates God’s restoration of the broken human situation as represented in each person in that the various nations were able to understand Peter in their own native language. This is the work of the Holy Spirit given to the disciples which fills them with courage. They become the announcers of God’s gracious act.

The two icons which perhaps most clearly show God’s efforts on behalf of the human race, are the icons of the Resurrection and Pentecost. In the first we see Christ, not coming out of the tomb, but descending to Hades which represents the iron grip that death had gotten hold on humanity as a result of its attempt to live a life without reference to God. There we see Christ shattering the gates of this imprisonment and lifting humankind out of its trap as represented in the figures of Adam and Eve. This icon is the icon of the feast of Pascha, but the event itself is commemorated not on Pascha but on Holy Saturday, the day before Pascha. Christ’s work of freeing humanity was completed even before He rose from the dead. God sent His Son to teach us how to live according to His will, so that in encountering death, Christ in His perfect love and divinity, could shatter it and all its manifestations. Interestingly, the icon of Pascha does

not show Christ coming out of the tomb, but shattering the gates of human imprisonment.

The Pentecost icon and all icons do not claim to be historically accurate depictions of persons or events. Rather they are depicting the inner spiritual reality within an historical reality. The Pentecost event was a real historical event, but the icon attempts to show what is going on below the surface.

There are three semi-circles depicted in the icon. At the top we see a semi-circle of blue light with rays of fire emanating from it and resting on the heads of the disciples. This represents the Holy Spirit descending on the apostles who are empowered to preach the gospel of peace which will restore the strife created by the confusion of tongues at the tower of Babel. The tongues of fire over the apostles’ heads have a cleansing and healing effect on both themselves and those who are open to receiving the healing words that they teach. Whereas Babel broke down human relationships, Pentecost heals the enmity between people.

The second semi-circle is the apostles themselves in the arrangement of their seating. They face one another in unity and love. The peace they share with one another will emanate outwards and spread to all lands and peoples. In their hands they hold the scrolls containing the words of the Lord which they are commissioned to share with all.

At the bottom of the icon is a figure wearing a crown and holding a tray with scrolls. He represents Cosmos or the World and emerges from the dark semi-circle into the light. The world receives the Word from the Apostles and is enabled to come out of the darkness in which it dwells into the light of union with God.

Perhaps the two greatest acts of God in human history are the sending of His Son who by death and resurrection shattered the grip which death had on the human race, and the sending of His Holy Spirit who enables us to live the new life that Christ has made possible.

Pentecost is not technically the birth of the Church. The Church existed before time because Christ is the eternal head of the Church. The Church is made manifest in time at Pentecost. Pentecost is the fulfillment of the Church and shows what the Church is called to be: a community of Christ’s followers at peace with and in unity with one another. They are to be filled with the grace and power of the Holy Spirit. They are to bring this peace, joy and unity to the whole human race by a process of repentance and inner change in which they themselves engage, and which they call their listeners to engage in.

The Holy Spirit enables the Church to be Christ’s light on the Earth and to be articulate in preaching the gospel. The Holy Spirit gives the necessary clarity so that people can understand and see the consistency between the spoken Word and the behavior of Christ’s disciples.

We have an understandable tendency to view the failings of the members of the Church, in particular its leaders, as being representative of what the Church itself is. And indeed this is a major stumbling block for people both within and outside the Church. It would be easier for everyone to see the presence of Christ in the Church if all of its members were more closely and consistently conformed to the person of Christ Himself. However, the Church is made up of people who have not reached perfection, but are working towards perfection. And in that effort, they sometimes mis-understand or even deny the Way of Christ. Yet all are welcome to come into the Church and join in the struggle to become faithful to the fullness of Christ’s gospel. But however far the members of the Church may fall short of that total faithfulness, the inner truth of the Church remains pure and unchanged, because Christ Himself remains pure and unchanged. We must make the effort to view the Church as the bearer of Christ’s eternal truths, and not the failure of its members to fully live out those truths.

The icon of Pentecost shows what the Church truly is: What Christ calls it to be, and what we strive to become. And the more like this true Church that we become the better witness we will be to our suffering world, so much in need of the healing which God offers.

Some people ask: do we really need the Church. Why not just try to follow Christ on our own? And Christian experience would respond that yes, we do indeed need the Church because we need one another’s help in the process of learning to be faithful disciples of Christ. And the Church is God’s chosen vessel of His grace. When we cut ourselves off from the Church, we cut ourselves off from a very potent source of God’s grace. The Church, despite its limited and often failing leaders and members, is the means of God’s mercy and salvation. This is not to say that God does not work outside the confines of the Church, as “the Holy Spirit blows where it will” and God loves all people. But once we have experienced the grace that is operative in the Church, we are at a loss when we exclude it from our lives.

The feast of Pentecost is a celebration and thanks giving for the sublime gift of God’s Holy Spirit. We ask God’s help to allow that gift to penetrate us that we may become all that God intends us to be.    +AMEN